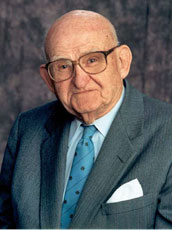 John Howard was the Father of Pancreatology. He was present at the first meeting of the Pancreas Club in 1966 at Northwestern and in a way could be considered one of the founding members although the group was not solidified until Charles Frey and William Schiller began organizing the meetings in 1975. John tracked down Wirsung’s copper plate and the seven known imprints (look at the home page of the Pancreas Club) and then wrote the story of Wirsung in JACS in 1998. He visited Whipple’s childhood missionary home in Iran and he was at the Vatican Archives in search of Whipple’s signature after Whipple had saved the U.S. Ambassador to the Vatican for FDR in 1938. He then wrote the exhaustive two volume treatise – The Life and Times of Allen Oldfather Whipple. In a letter to the Pancreas Club in October 5, 2007 John notes “It is a scholarly biography of the “Father of Pancreatic Surgery” and the influence of his wonderful mother on his character. Over a decade of preparation went into the two volume set of over 1000 pages.” Truly a remarkable treatise about the Father of Pancreatic Surgery by the Father of Pancreatology.

However it was his book Surgical Diseases of the Pancreas with George Jordan that began the evolution of the science of pancreatology in 1960, a time when little was known of this mysterious gland whose duct was first described long ago by Johann Wirsung in 1652 yet our knowledge did not begin to mature until long after insulin was first isolated in 1921. The latter was made possible by a surgeon’s knowledge (Banting) that the exocrine enzymes were interfering with the isolation process of the illusive hormone and ligating the blood supply to the pancreas would atrophy the gland. Subsequently, during this first part of the 20th Century, little else was known about the exocrine pancreas. Perhaps that was why John was attracted to this retroperitoneal organ. To quote Charlie Frey:

“John in 1960 published the first comprehensive textbook on pancreatic disease with his co-author George Jordan. Better than anyone had previously, he described and differentiated the natural history of Gallstone and Alcoholic pancreatitis. That book was the bible on the pancreas and the most influential text on the pancreas for about 20 years. I met John at the American Surgical Association meeting in 1964 when I was giving a paper with Frank Glenn, Chairman of Surgery at Cornell-New York Hospital on the operative management of Gallstone pancreatitis. John and I have been seeing each other at Surgical meetings ever since.”

In 2007 John had published 464 journal articles, book chapters and books – just 43% were on the pancreas – but to understand the evolution of pancreatology one must read the books of John Howard – these include the 3 very different editions of Surgical Diseases of the Pancreas, 1960, 1986, and 1998, the History of the Pancreas. Mysteries of a Hidden Organ, 2002, and the 2 volume treatise – The Life and Times of Allen O. Whipple, 2009 (available through KarenReitz@utoledo.edu).

John died peacefully after a very short (1 week) illness with CHF. He was 92. He was lucid until the day before his death, and actively participated in the decision to enter hospice (he was \”enrolled\” in hospice for about 2 days). He is survived by his second wife, former college sweetheart Sarah, as well as a large family.

John Howard’s Obiturary from the Toledo Blade is at:

Contributions may be made to the University of Toledo Foundation (with a note in the memo for J.M. Howard Endowed Professorship), P.O. Box 586, Toledo, OH 43697.

Information provided on this site is for member benefit use only. Copying or reproducing any of the content and use of our member email list is prohibited. We are happy to review any requests for promotions to our members. Thank you!